Do you play card games? If you're familiar with cards, you know that there are four suits of cards with two different colors – black and red suits. Under the red suits are diamonds and hearts, while clubs and spades are in the black suits.

Each suit contains 13 cards. The ace card can be the highest or the lowest, depending on the game.

The Ace of spades is a symbol of secret mysteries. It is the most spiritual card in the deck and the most material. It signifies many tearful experiences depending on the content. Because of its dark color is associated with imminent death, bad luck, hatred, war, and disaster. 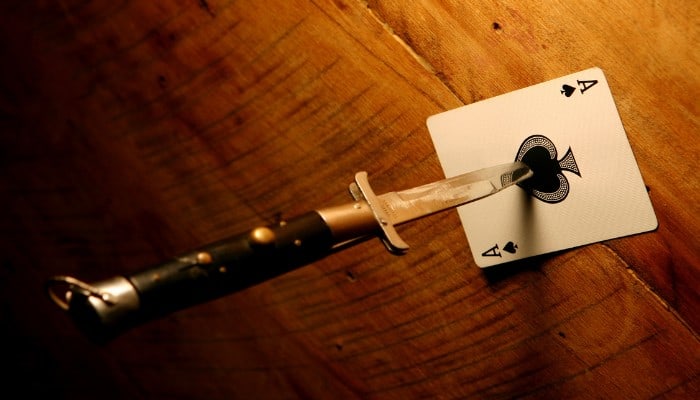 There's a reason why the Ace of spades is linked to tragedy. Not only because of its dark color but from the belief that people use spades to dig into the earth.

Therefore, people associate this card with digging a plot for a casket, symbolizing death.

The history of the Ace of spades is linked to the history of playing cards. Cards were usually numbered from ace to 10 (without jacks, queens, and kings) in the past.

The court cards are the highest numbers in each suit.

However, people promoted the ace cards over the court cards, and different suits have been used in various regions. Meanwhile, the spade suit deck is becoming popular in French decks.

Playing card games became popular in ancient China, paving their way in Western countries in the 14th century. Some of the earliest decks were numbered from one to 10.

The term ace is used for the smallest unit of the card. During this time, knaves, queens, and kings were introduced to the deck and considered the highest cards in the deck.

Different gameplays have been developed, wherein such cases aces were used as the high cards, and the French people liked this idea, and later on, the royalty cards became the lowest cards in the deck.

Different suits were introduced in Europe aside from the usual playing cards with only four decks. Cards with swords, cups, wands, and coins suits are often found on tarot.

But in France, playing cards have a different set of suits, keeping the hearts from the German deck, replacing diamonds instead of bells, changing acorns into clubs, and keeping the leaf-shape suit but renaming it spades. They created a deck of cards where the Ace of spades belongs, leading its way over court cards.

In the poker game, the highest card in the deck is the Ace of spades. However, its reputation as the “death card” came from the monarchy when they taxed the early British decks of playing cards. Anyone can reproduce the other 51 cards in the deck, but the Ace of spades needs to have a logo from an accredited printer to ensure that taxes are correctly paid for each deck.

Hence, the illegal printing of cards is a dangerous business, and one person was sentenced to death for printing the Ace without paying the correct amount of taxes, getting its name as the death card.

The association of death to the Ace of spade likely came from the inclusion in the legendary “dead man's hand,” where Wild Bill Hickok holds two pairs of aces and eights at the time of his death.

Since people believed that it was the luckiest or highest card in the deck, during World War II, soldiers painted Ace of spades onto their vehicles and body armor as a sign of good luck. In the Vietnam War, some American soldiers placed the Ace on the bodies of dead enemy soldiers to instill a superstitious fear on the card and manipulate it to their enemies.

What does the Ace of spades mean sexually?

As mentioned above, the Ace of the spade is the highest level of the card in the deck. Aside from that, it's been known to represent many other things, where one of them represents the asexual community.

The ace part of the spades portrays the short form of being asexual because of the phonetic pronunciation. Because of this phonetic shortening, the Ace of spade symbolizes anyone who's asexual.

If you're wondering why the Ace of the spade is explicitly used but not the other aces, then here's a short explanation for that. The Ace of the spade represents aromantic asexual people, meaning that these people do not have any romantic or sexual attraction with other people.

The ace spades or the death card is probably the most misunderstood card in the deck. Many people are afraid of this card because of its bad reputation as a bringer of bad luck.

In practice, it rarely foretells death; instead, it's one of the most hopeful cards in all of the spades.

The Ace is the beginning of any suit and is associated with number one. In numerology, number one symbolizes the beginning and fresh starts, and all the Ace brings new people, things, and places.

You may also find this interesting:  Most Influential and Powerful Numbers in Numerology

However, the Ace of spades is the only Ace that signifies both an ending and a beginning. Other people perceived the Ace of spades as something hopeful because it represents transformation and rebuilding after a loss.

Moreover, the Ace of spades symbolizes the mind. It portrays the things that can affect the mind, including worries, conflicting opinions, and tough decisions.

If the Ace of spades appears in the layout, it shows whatever issues the querent is thinking on their mind.

In most cases, it's about decision-making and actions that the querent needs to do.

When the Ace of spades comes after hearts, it represents an emotional transformation from the past and letting go of a bittersweet experience. Alternatively, the querent might be experiencing an emotional breakdown that requires their decision.

The card's position can also give a hint to whether the action happens in the past, present, or future.

For example, the 4 of hearts is followed by Ace of spades, meaning the querent is facing a decision about a relationship, including marriage, family, or friendship. Luckily, it signifies reconciliation and recommitment to the partner to make the relationship work.

On the other hand, if clubs follow the Ace of spades, it indicates a pending decision about the study, work, and game. If the Ace of spades has the initial position in the card layout, it means that the querent is the one who makes the decision.

If it's in the middle position, the decision is mutual to both parties, but someone else decides if it's in the final position.

The cards that surround this card combination provide clues to the nature of the decision. If the 5 of clubs come after the Ace of spades, it means that the querent has already decided to handle the issue at hand.

The querent faces significant decision-making that has something to do with the future, such as saving and investing money.

If the Ace of spade comes last, it means financial troubles. Therefore, the querent needs to tighten their budget because of some financial setback, like bankruptcy or reversal.

You may also find this interesting:  Top 10 Healing Crystals for Anxiety & Stress

The 8 of spades is another health card that signifies a doctor or a specialist, and together with the Ace of spades, it can refer to mental health specialists, such as psychologists or psychiatrists.

Moreover, when the Ace of spades is combined with other aces, it represents a fresh start. For example, when it's combined with the Ace of hearts, it means emotional rebirth after a period of mourning of someone.

With Ace of diamonds, it could mean rebuilding your financial status after a significant financial setback. Lastly, with the Ace of clubs, it's a combination of restoring a social or business situation, such as a relationship or career.