The Catholic Church acknowledges the being of only three (3) archangels. Also, in the Bible, there are only two (2) archangels named in both the Old and New Testaments, Archangel Gabriel, and the other one is Archangel Michael.

One of the beings closest to God is Archangel Gabriel. He is God's divine messenger.

Archangel Gabriel was the archangel who informed Daniel about the secrets of God's plan. He was that archangel who blazoned John the Baptist to Zechariah, and the birth of Jesus to Mary.

Archangel Gabriel: Who is this Archangel?

Archangel Gabriel is one of the seven (7) archangels who enters and presents his service before God's glory.

Archangel Gabriel's name derives from a Hebrew word with two roots: “Gabri” and “El.” “Gabri” stands for power, might, and strength. “El” is a Hebrew word for God. His name means “power of God” and “God is mighty.” His name can also imply “man of God” or “God has shown might.”

St. Gabriel, the archangel, also represents the angel of death in the Bible. At the same time, the others recognize him as God's chief messenger. Gabriel is always closest to God's throne and called a “left hand of God.” Even so, most of the time, Gabriel sends messages, thus called the messenger.

The name of this archangel reveals his works and roles. Man of God: he serves God by bearing God's word to His people. 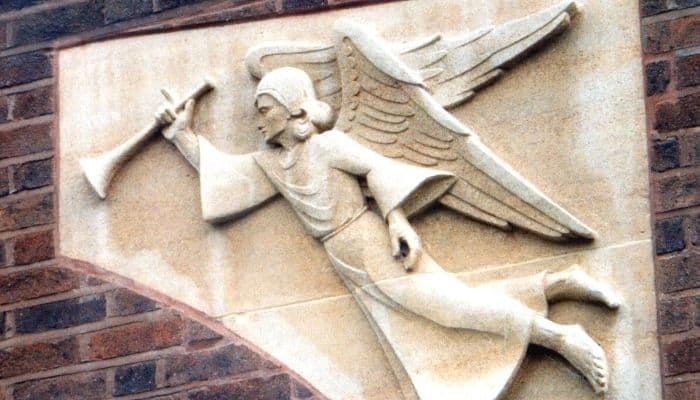 He is the initial and most profound divine messenger: conveying compelling messages and abundant mercy, tenderness, and enlightenment to humankind, whatever their creeds and affiliations are. The Archangel Gabriel is the primary messenger of God, he always aids with anything that has to do with Communication.

Moreover, Gabriel helps those people whose jobs have something to do with Communication. They call them their patron saint.

He is the protector of the people operating as messengers, diplomats, postal agents, couriers, journalists, academicians, writers, and other communication workers.

Archangel Gabriel is for artistic writing and Communication. But, this angel also associates parents' fertility, delivery, and child-rearing.

They say that Archangel Gabriel's image is feminine-like. Gabriel has long golden hair, while a white flowy robe is what he wears.  In paintings and such, a symbolic copper trumpet is what he holds and pipes.  And most of the time, Archangel Gabriel handles a spear and a jasper mirror with an X in both hands.

Also, some depict Gabriel as a young winged cherub who is carrying a lily in his hands. Sometimes, represented as an angel holding a lily and a scroll. They say that the archangel's appearance is likely because of his close affinities to the mystical feminine, Mary.

Archangel Gabriel's feast day is March 24, a day before the Feast of the Annunciation and the Roman calendar included it in 1921.

However, in the year 1969, they modify Archangel Gabriel's feast from March 24 to September 29 for a united feast celebration with the Archangel Michael and Archangel Raphael.

You may also find this interesting:  Archangel Michael: The Leader Of All Angels

Do you know some of the appearances of the Archangel Gabriel in the Bible? Here are some of them:

On other occasions, they believe that he is the unnamed angel who appears and delivers God's message. Here are some of those instances:

On account of the times that the Archangel Gabriel brought important announcements, it makes him stand alone as the highest of all angelic messengers.

When To Call Upon Archangel Gabriel?

Every angel has a role, but an archangel occupies a more exalted tier on the hierarchy because of their essential functions. Aside from being God's special messenger, Archangel Gabriel has limitless power.

Whether you are serving as a communication employee or a parent or even a child, whatever your social status is and whoever you are- call for the Archangel Gabriel, and he will come to give you his service.

He can help anyone in need, all at the same time. Archangel Gabriel's service points are the following:

You may also find this interesting:  How Angels Communicate with Us?: This Is How They Get In Touch

In times that you require to settle, discuss, or speak about something: you can ask him to help you, and he will be there to assist you in unearthing ways to interact with others well.

Sometimes, one feels down for some implicit reasons. When you ponder yourself and your capacity and inclination to achieve what you are trying to accomplish, beckon for Archangel Gabriel. He will be there to comfort you and lead you to your fancied path. Gabriel will help bring out your Passion and boost you to keep reaching for your dreams.

When you feel like you are losing your touch and your way, call on Archangel Gabriel.  He will then shower you with creativity, concepts, and confidence in yourself. He will be that muse of yours to help you stimulate advancement.

For children, your delight and wellbeing are vital to the archangel. He will help you and guide you.

The word of God is what Archangel Gabriel brings us. Helping and making humankind understand the message conveyed. He will help you hearken and trust the will of God with a genuine fortitude.

Relax and keep a quiet mind. Be observant, believe, and listen to the will of God in the voice of Archangel Gabriel.