Archangel Michael: The Leader Of All Angels - Spiritual-Galaxy.com
Skip to content

This angel heals, protects, and the leader of the army of God. Archangel Michael is the “chief prince” of heaven.

There are seven (7) archangels, yet none can match Archangel Michael's power and status.

Archangel Michael: Who is this Archangel?

The Old and New Testaments say two (2) archangels, and one of those archangels is Archangel Michael. He is the only Archangel that the Bible calls an archangel.

The name Michael derives from a Hebrew word: Mi-ka-El. His name means “he who is like God.”

Mikhail, Mikhael, Mikail, and Mikael are some other spellings of Archangel Michael's name. People also acknowledge him as Saint Michael.

Archangel Michael's name unfolds his role before us: he represents and acts on behalf of God.

Not in the Christian tradition is he honored but also among the Jews and Muslims.

In some traditions, they see Archangel Michael as the greatest of all angels. He brings peace and harmonizes all beings by working against the forces of darkness. 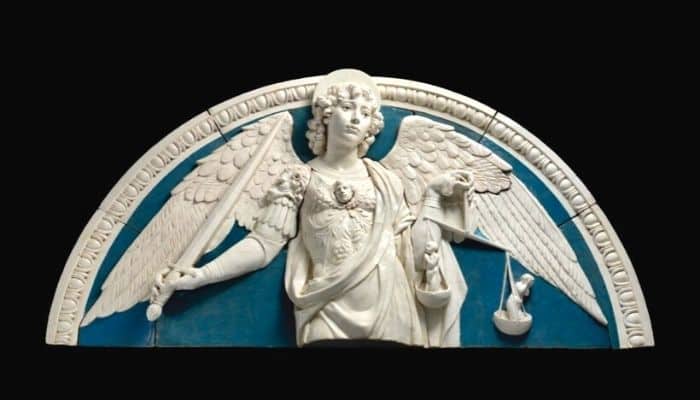 He leads the army of God. Aside from being the judger of souls: he is a protector and a defender of God's people.

Moreover, he treats himself with things that have something to do with truth and justice.

Famous icons see him as a warrior wearing armor while using a sword, banner, or divine justice scales. Often shown in art is Archangel Michael defeating Satan dressed as a dragon.

A blue flame emblazons the sword of Archangel Michael. It symbolizes fire. It recognizes as the blue rays, which signify God's will.

Archangel Michael: the chief Prince, and the celestial warrior, is a protector and a patron of the swordsmen, mariners, grocers, masters of arms, paratroopers, military personnel, and police officers.

Object and reverence, Archangel Michael is a figure.

The people who love Archangel Michael celebrate his day every 29th of September. He shares the same feast day with Archangel Gabriel and Archangel Raphael.

You may also find this interesting:  Archangels: The Complete Guide! (Who You Gonna Call?)

Like Archangel Gabriel, both testaments in the Bible mention Archangel Michael.

The Bible mentions the Archangel five (5) times. Here are his appearances:

Like Archangel Gabriel, some think that Archangel Michael is one of those unnamed angels whom the Bible mentions, for he matches the description given. Those mentions are the following:

The Essential Functions Of Archangel Michael

In the celestial hierarchy, Archangel Michael performs essential functions. These functions are the following:

The Angel Of Fire, Archangel Michael

Believers of the Archangel Michael say that he resembles the fire element. According to them, he reaches fire because of his works, and it shows.

Here are some points why Archangel Michael is the angel of fire:

Archangel Michael is the champion and soldier of God's people. He resembles fire because fire can ignite things.

Fire emits light. When you are not familiar with things, sometimes, you feel like darkness is circling you. Archangel Michael can be a fire. He can shed light where there is darkness. He can enlighten your clarity in spots that need clarity.

Everyone sins. You can ask Archangel Michael for help in winning these wrongdoings. With Michael's supervision, one can overcome things, and we can unify deeper with God.

You may also find this interesting:  Archangel Ariel: “The Lioness Of God”

Archangel Michael: His Reaching Out

Archangel Michael, the leader of God's angel army, fights evil and darkness with the power of light and goodness.

They say that this Archangel goes straight to the point in times of giving his service. If you hear a voice, a sound, a whisper, a crash, or any other- listen because that is Archangel Michael; he is trying to give you his advice.

Sometimes, God and his angels like to leave visible signs to the naked eye when they are helping you. Physical manifestations.

If you keep seeing the colors blue and purple, Archangel Michael is around you. He is trying to let you know that he is with you.

When you feel a different kind of feeling like you are calm, it means that Archangel Michael is beside you.

Be attentive and watch out for symbols. If you have any questions, ask Archangel Michael, and he will give you things that will make you relax. He will surely help you.

Please take note of these signs and consider them. The more symbols you encounter and experience, this Archangel is trying to reach out to you. Let him in, and he will then guide and protect you.

When To Call Upon Archangel Michael?

When you face hurdles and hardships, he will give you strength and courage no matter what type it is.

If you intend to pray to Archangel Michael, make sure to consider the following:

Pope Leo XIII composed a prayer to St. Michael the Archangel in 1886.

If you would desire to receive a shield from the Archangel Michael, cite the prayer here: 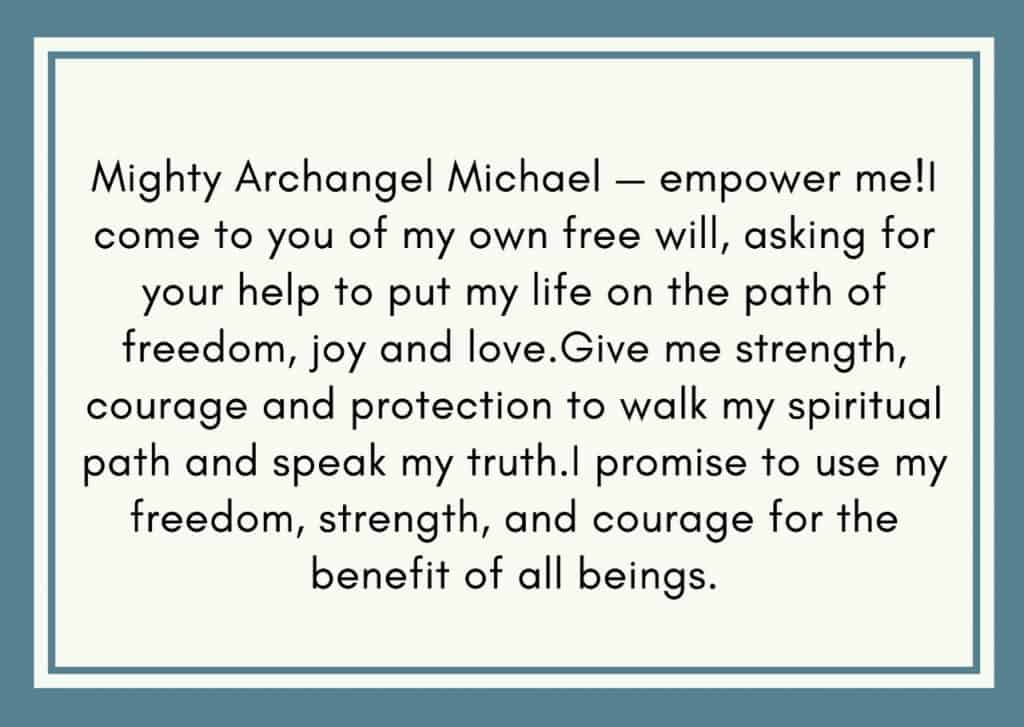 Hope in God in the figure of His trusted chief prince.

Trust Archangel Michael. He will escort you and empower you. He will defend you from evil and the darkness.

He will be your armor and shield. Archangel Michael is your helper against all immorality and all the decoys of the devil.

May the Archangel Michael help you see the truth and help you in seeing your absolute potential.