Ignoring Aries Man after Break Up: Control His Fire! - Spiritual-Galaxy.com
Skip to content

What happens when you ignore the Aries man? Will it work to get him back after a breakup?

After a breakup, the fiery Aries man is uncontrollable; you’ll find it challenging to deal with him. Ignoring him can be effective in controlling his fire so you can get him back or part with him on good terms.

Breaking up with the Aries man is an explosive and dramatic experience, as expected from this passionate and energetic personality. Ignoring him helps you recover and rebuild your relationship so you can start over as reunited lovers or as new-found friends.

Keep reading to learn about the Aries man’s personality and what happens when he breaks up with someone. You will also learn how ignoring him after a breakup can work wonders in controlling his fire.

Getting your hands on Aries Man Secrets guide can also give you the same, effective results in trying to tame the fiery Aries man down.

Breaking up with the Fiery Aries man

The Aries man is a Cardinal Fire sign and has an energetic and outgoing personality. He is driven, confident, impulsive, and has all the traits of a leader.

You may also find this interesting:  6 Things You Should Know Before Dating An Aries Man

The fiery Aries man has an infectious and inescapable personality that you can’t help but be drawn to him like a moth to the flame. You can break up with him but can’t stay away from the pull of his enigmatic personality.

The Aries man is a sociable person, but he can find relationships trying and too complicated to handle. It is rare for people to have enough energy or willpower to match his.

A relationship with the Aries man is passionate and life-changing, but his nature is prone to be jealous and possessive of his partner. He can obsess over someone because of his childish selfishness and fear of abandonment.

The Aries man will not show any sadness or negative emotions after a breakup because he hates appearing weak to anyone. He needs to calm his emotions on his own before he can face his ex or anyone else who knows how he feels.

Why ignore him after a breakup?

The Aries man copes with a breakup in different ways, but that does not include moping around and being sad. You will never see him chase after you, beg for you to come back, or dwell in the past.

Ignoring your Aries man after a breakup is an excellent tool for getting over him or getting him back. The following are the reasons why a no contact rule after a breakup can work wonders for your relationship.

To give him space

Ignoring the Aries man gives him the chance to be alone with his thoughts and feelings. This allows him to come to terms with the breakup and have a clearer view of the situation.

No matter how peaceful it may be, a breakup comes with intense and varied emotions. By keeping your distance from your man, you help him make sense of these emotions on his own and make better decisions.

To make him regret losing you

Staying away from your Aries man makes him regret that he ever let you go. Let him date and see other people; it will make him realize that the grass was greener when he was with you.

It will take a long time, and he may have to go on several dates before he sees that you are still the best choice for him. He will show that he’s having the best time with his new relationship, but they don’t last long enough for him to form any deep connection the way he did with you.

To allow things to work out on their own

Sometimes the best thing to do is not do anything at all. Acting on your impulse to call, text, or see him will only force things and prevent your reconciliation.

Forcing to reconcile with your Aries man before the two of you are ready makes you look desperate for him to come back to you. Giving him attention flatters him, but it’s easy to overdo it and turn him off.

To show your stability

The Aries man hates chaos and uncertainty so he will stay in a relationship only with a stable and secure partner. Show your stability to him by learning to be on your own and being the independent woman he met and fell in love with.

Don’t let him see you neglect and lose control over your life because of your breakup. Show him that you are not insecure and don’t need to cling to your relationships to have a happy life.

To get his attention

If you have been chasing after him after your breakup, ignoring him is not something he would expect. It will intrigue him, make him wonder, or even shock him if you make a sudden change in dealing with him.

Ignoring the Aries man makes him react to his instinct of winning back your affection. His aggressive and competitive nature hates to lose something that he is used to having in his life.

To prove a point

The most likely reason for the failure of your relationship with the Aries man is your lack of independence. Ignore him after a breakup to prove to him that you can live without clinging to anyone.

Prove to the Aries man that you can be as persistent and passionate as him in going after your goals in life. Don’t let your breakup slow your life down; your relationships should not dictate how you live your life.

To beat him at his own game

The Aries man acts like a conqueror when in love; he wants to work hard and overcome challenges to win your heart. He will lose interest if you make it too easy for him to keep you.

Ignoring the Aries man gives him a wake-up call not to take you for granted or treat you as another conquest. Beat him at his own game by ignoring him instead of waiting around for him to come back to you.

If you need more help with successfully doing this, Aries Man Secrets is highly packed with information and tips in winning against the Aries man at his own game.

To take a break

Being with the Aries man needs constant hard work, and keeping up with his unlimited energy and drive can take its toll on you after some time. And a breakup with him adds to the stress in your mind and spirit.

Ignoring the Aries man after a breakup gives you your much-needed rest from all the stress from being with him and breaking up with him. Taking a break from him is essential for your mental health and well-being.

To focus on yourself

The Aries man likes to be the center of attention in every situation, even in his relationships. Breaking up with him will make you feel that you have lost a big part of your life.

Ignoring the Aries man after a breakup will help you refocus on your life and regain control of its direction. This way, you gain a new perspective in life where he does not influence you.

What happens when you ignore him?

You will never know for sure how the Aries man reacts if you ignore him after a breakup. Below are some possibilities:

He ignores you back

If the breakup hurts the Aries man, he will choose to disappear to handle his emotions on his own. He may come back once he’s sorted things out, but he may choose not to if he feels that the pain was too much.

You may also find this interesting:  7 Obvious Signs an Aries Man Is Rejecting You: Open Your Eyes!

If the Aries man is not interested in you anymore, he will be thankful that you ignore him. It’s time to give up on him for good when he goes quiet on you.

The Aries man is proud and conceited, so ignoring him results in anger because of his hurt pride and bruised ego. He may take his feelings out by getting angry at you or others, even himself.

Getting angry doesn’t mean that the Aries man wants you back; it’s a normal reaction when he faces life changes or events that he can’t control. Lashing out on you is his way of coping with your breakup, and the best way to deal with it is to avoid him.

He sees other women

Of all the signs in the Zodiac, the Aries man is the most likely to get into a rebound relationship after a breakup. All his energy and emotions need to have an outlet, and being with other women also takes his mind off his breakup. 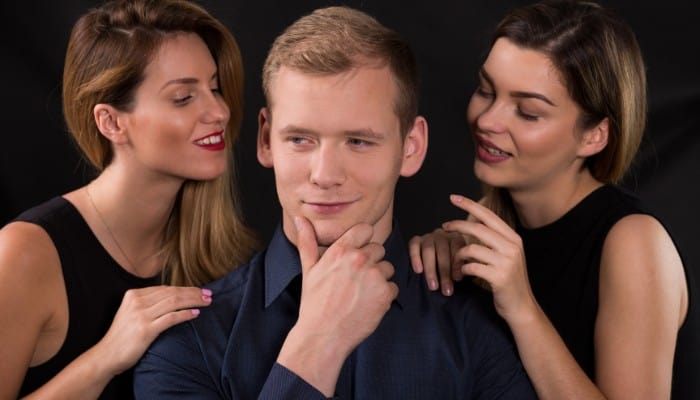 The Aries man enters into rebound relationships to get your attention if you ignore him after a breakup. He will go through a string of women until you stop ignoring him or until he is done with you and moves on.

If the Aries man still has feelings for you, he has no problem chasing you when you ignore him. He will contact you through text or check you on social media.

The Aries man is confident, but he needs encouragement, so don’t ignore his text if you want to get back together with him. Ignoring him when he reaches out to you will make him feel rejected and cause him to give up on you.

Since the Aries man is too confusing to deal with, Anna Kovach explains and teaches everything about him better and more comprehensively in her ultimate guide Aries Man Secrets.

It won't let you down!