Have you been to the Joshua Tree National Park? Did you feel energized? If yes, or just planning to go there, aren't you curious what this tree symbolizes and why it is famous?

The Joshua tree is, also known as the yucca palm, came from its scientific name, Yucca brevifola, a member of the Agave family. Before, it was considered a giant member of the Lily family; however, modern DNA studies have divided the formerly huge family into 40 distinct plant families.

That's why the Joshua tree belongs to the more accurate Agave family.

Years ago, the native people recognized the Joshua tree for its valuable properties; they can weave its tough leaves into baskets and sandals while roasting the flower buds and seeds to add to the diet. 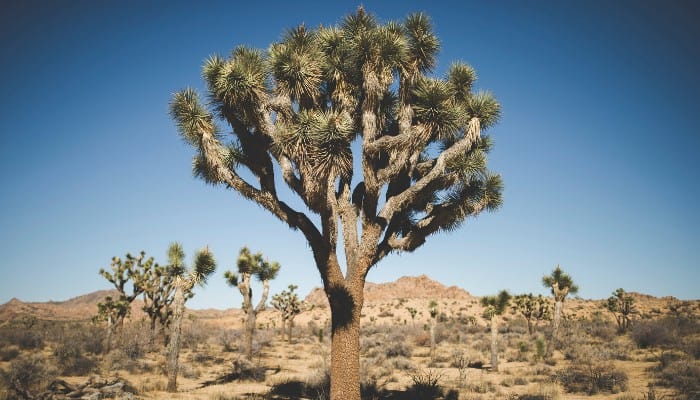 During the mid 19th century, some Mormon immigrants had made their way across the Colorado River. Some people say that this tree is named after the biblical figure, Joshua, where they see the tree's limbs as outstretched in guiding the travelers westward.

However, this story is not supported in the historical record. Some evidence implies that Joshua and the Joshua trees represent the Mormon's destruction to the desert.

They believed that the branches resemble outstretched arms in prayer, and perhaps the tree's sharp, blade-like leaves represent the arrayed forces of Joshua's army.

Spiritually, the Joshua tree that grows fiercely adverse condition is seen as a symbol of faith, love, and hope amidst the aridity in the desert.

It tells a story of survival, resilience, and beauty. They are silhouettes that remind people who live there that we are home.

People who live near the Joshua tree say that the energy is natural. They say that the Joshua Tree National Park is a place of multiple energy vortices, where these strange trees that live in relentless desolation can neutralize your bad and good energy. 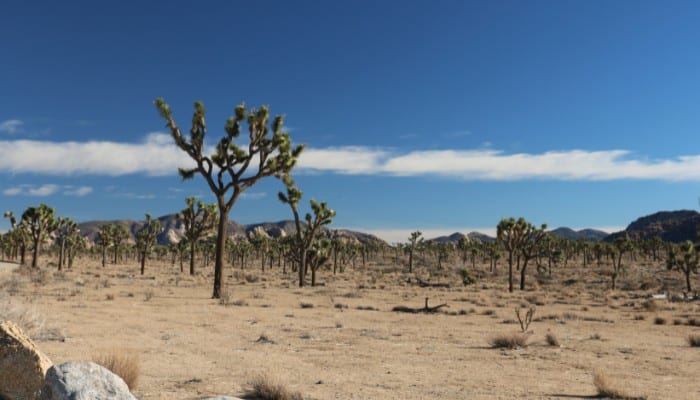 Legends say that Mormon pioneers named this tree after the biblical figure Joshua, and the branches of the trees are like arms outstretched in supplication.

As mentioned earlier, the Joshua Tree National Park is a place of multiple energy vortices; by the way, do you know what vortex means? A vortex is a place on the planet where you can get increased energy.

The energy of a vortex serves as an amplifier.

An amplifier takes a signal or frequency to make it stronger. If you're standing in a vortex, the energy will increase physically, mentally, emotionally, or even spiritually.

This energy can augment your thoughts and intuition to gain unexpected insight.

Moreover, it can amplify your happiness and joy or have a physical effect, such as getting rid of negative thoughts or throbbing pain. The energy has a profound spiritual effect of getting a better understanding of you are and your behavior.

This National Park has 18 known vortices on the land. Whether you're asking for divine guidance, inspiration, or creativity in your career, the vortices can help you find clarity.

Yellowstone has geysers and moose that can destroy the entire planet. The Grand Canyon has a big, gaping hole in the ground that's cool, but there's a lesser-known park at the bottom of California, which is fantastic – the Joshua Tree National Park.

Some people say it has death, despair, and dark, sinister history.

The Joshua Tree in the Mojave Desert is the only place on Earth where you can find giant yucca plants known as the Joshua Trees. According to legends, the Mormons named these trees when they passed through the area during the mid 19th century.

They thought these twisted, creepy-looking things resembled the biblical Joshua with his arms stretched directly to the promised land.

You may hear it lovely and holy, but the Joshua Tree National Park doesn't have any of those religious qualities that the Mormons thought when they named this tree. The Joshua tree's history is covered with different myths and tragedies, so if you're a superstitious person, you might even say that this place is cursed.

Let's start with some intriguing stories about Joshua Tree.

These two friends, Matt Riley and Henry Kitto, decided to hike out from the OK Mine to the town of Mecca so that they could celebrate the 4th of July with the locals. They had one canteen in between, and it has no big deal because the Cottonwood Spring is just a mere 25 miles away, where they planned to refill once they get there.

At about 12 miles away, Kitto began feeling not so well, so he decided to turn back. He gave the canteen to Riley and walked back to the OK Mine, and rested there.

But the anticipation of the 4th of July rager is too much for Riley to keep going. Sadly, his body was found under a bush near the road.

He's been so disoriented and dehydrated that he didn't know how close the water was. While you're visiting the park, you can stop by Matt Riley's gravesite.

Before the Joshua tree became a national park, it was a desert in the middle of another desert, and the only thing that brought human beings into this place was because it's believed to have gold. Even when people find enough gold to live in the blazing heat, there is still smothering heat that can kill them.

You may also find this interesting:  Desert Dream Meaning: How To Go Out And Join The Crowd?

In the 1890s, Johnny Lang was searching for his horse. When he sat down to rest, he spotted a gold nugget in the ground.

According to the tale, the “Lost Horse Mine” became one of the most successful mines in the area. Lang himself lived a pretty prosperous life; however, there was speculation that the big chunk of gold he found was just a gift he got from business partners over the years.

If this speculation was true, Lang is saved from his crimes, right up until 1925, where he left a note on the door of his desert hut, saying, “Gone for grab. Be back soon.” Then, three months later, Lang was found by a rancher named Bill Keys, mummified in the desert.

He was wrapped in a sleeping bag, and authorities concluded that he died due to natural causes.

Another myth about the Joshua tree is that human beings made this tree vulnerable to fire. Deserts are dry, but the plants that grow there can adapt to dry conditions.

Succulents and other desert plants can store water in their tissue, so they can live a very long time between storms without drying up themselves. Moreover, succulents are fire-resistant because they are full of water, unlike in a woody forest.

There are only limited grasses in the Mojave, and the plants are widely spaced; although lighting fires are common there, they never burn more than a quarter of an acre. However, according to reports, the number of fires in Joshua Tree National Park has steadily increased over the years.

You may also find this interesting:  Forest Dream Meaning: The Long Wait Is Over

The Joshua tree is a hopeful symbol in a world full of chaos. The gap between the so-called Promised Land and the real America is one of the driving forces behind the famous U2 album, The Joshua Tree.

The whole essence of the album is shaped around the band's musical exploration of both American and Irish folk roots. The album features desolation of the soul, an immense, timeless landscape with a nation of progress and oppressor in a place where dreams and violence co-exists.

U2 saw the Joshua tree that grows fiercely in harsh conditions as a symbol of hope and faith in the middle of dryness. The Joshua tree is named by early Mormon settlers inspired by the prophet Joshua, because the tree’s branches looks like Joshua raising his arms to pray.

According to Anton Corbijin, after the album's title was decided, they spotted a lonely Joshua tree along Route 190. They cease after  taking shots beside the tree because of the freezing temperatures.

Because the idea was to depict a desert environment, the producers asked the bands to remove their coats, and as expected, they had a freezing facial expression.

The Joshua tree featured on the album's sleeve took place in California, an area close to the famous Death Valley. The park was named after the famous tree and extended to the Mojave desert.

The U2 tree was vandalized in 2005 when chopped off one of the branches. However, this tree had officially died in the year 2000.