It's the weekend, and you're planning to go on a road trip. You plan to go to the countryside to enjoy the sceneries of fields and mountains.

You see different insects, like locusts, on your sightseeing, and you're wondering if it has any meaning.

Locust lives on land and crops so that they may symbolize an interruption to the union of man and nature. They indicate to man that nature has a good and bad effects.

You can rely on nature for protection and food source; however, it may attack at any time and can ruin our well-being.

Therefore, seeing a locust is a message from the universe that humans are vulnerable. They have a dual purpose for keeping humans humble and pushing them to strive for the betterment of the environment. 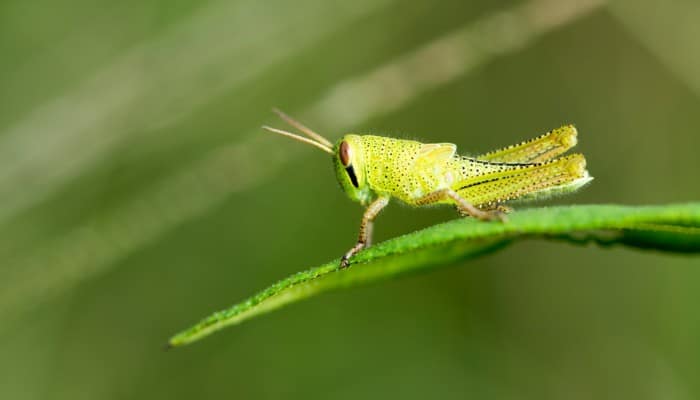 Another symbolism of locusts is to encourage you to overcome self-destructive behaviors. It means that you need to stop engaging in any harmful activity that can affect your health and nature.

The appearance of this insect could symbolize that your words and actions can hurt people around you. Thus, this locust signifies that you should practice empathy in your daily life.

Additionally, locust represents the need for a change. It could refer to a change in career, correcting a broken relationship, or moving to another place.

This insect teaches you to set your fear aside, face what's in front of you, and make a move.

When this insect appears in front of you, you should monitor the people you keep. If your friends or people within your circle aren't adding any input to your life, it's better to stay away from them.

What does a locust symbolize in the Bible?

Locusts usually appear in the Bible when God is issuing a judgment or disciplining His people. They are also mentioned as food, where John the Baptist has survived on locust and wild honey in the wilderness.

However, it was most mentioned in the Bible during God's wrath to show His power to people who defy him.

Locusts are grasshopper-like insects that are unsociable. However, locusts can swarm in certain conditions, which can be a destructive agent for crops in the field.

In the Bible, locust swarms were mentioned in the Old Testament prominently in the history of the Jewish people. Moreover, they also appear as symbolic figures in Revelation.

Locusts starred famously in the Egyptian Plague when Moses took on Pharaoh in Egypt. One of the ten plagues Moses called down upon the Egyptians was locusts.

It's because the Israelites had been tyrannized for many years under barbarous Pharaohs. During the time of Moses, God planned to free them from slavery; however, Pharaoh's heart was pitiless.

The people survived, and Pharaoh remained stiff, so God sent another plague, such as pestilence to kill their livestock, boils that infect their bodies, and hen hail to destroy their food supply.

The Pharaoh remained his hardness, so God sent locusts to eat whatever the hail hadn't destroyed. They serve as a cleanup crew to get rid of anything so that there will be no food left for Pharaoh's people.

After God sent locusts, it was followed by two more plagues – three days of darkness in the land and, lastly, the death of every first child.

In Revelation, the locusts are no ordinary. They will not swarm against the vegetation, like grass or trees, instead swarm against humans.

These locusts will swarm to torment people with pain comparable to a scorpion bite for five months. The Bible says that people will suffer agony and long for death but can't find a way.

You may also find this interesting:  Top 7 Scorpion Dream Meaning: Unlock Their Meanings!

The locusts from the Revelation have unique characteristics, where they upgraded from swarming crops to people.

As you notice, locusts in the Bible are worth paying attention to because they can spread like wildfire, causing devastation and sorrow to people. God only used this way so that people who defy him will repent.

Just like us humans, as parents, we heighten the discipline for a stubborn child, then as they grow, we reduce the restriction, so they no longer repeat undesirable behavior.

The devouring swarm of locusts symbolizes a destructive scourge. In Exodus and Revelation, they are seen as hell-born torments.

You shouldn't ignore this aspect since exorcisms were used against locusts.

In the book of Exodus, God decided to send an invading swarm of locusts, and their appearance is like a natural phenomenon. Still, in the book of Revelation, the symbol has a different meaning.

The swarm of locusts is more like a spiritual and moral torment.

What does it mean when a locust visits you?

When a locust appears to you, it means that the universe is telling you to take a leap of faith and do what you think is right without fear. Usually, you are contemplating a decision that you tend to avoid because its effect is massive.

It could mean a change in career, relationship, or transfer of location.

Locusts are grasshoppers-like insects that jump forward, not backward or sideways, so when a locust shows up, it's telling you that you're making the right moves to advance in your current situation. Or it's a sign to go forward and pass whatever the obstacles are.

Locust's ability to connect and understand your vibrations is the reason why there signify your inner voice, so it's telling you to trust your instinct.

You may also find this interesting:  Bees Dream Meaning: Should We Worry?

Spiritual meaning of locusts in a dream

Did you dream about locusts? If yes, locusts in your dream mean some type of greed or showing aggression towards other people. Someone you know (or it could be you) might be sucking on other people to satisfy your/his/her selfish needs.

There's a part in your life that requires immediate attention.

If you dream about a locust swarm is moving towards you, it means there is some type of attack coming to destroy you. It could be on your assets, belongings, or your position.

Be careful of greedy and selfish people who will do whatever they want just to hurt people.

Dream about escaping from locusts

If you dream yourself escaping from flying locusts, it could mean that you're trying to get away from troubles or from people who take advantage of your kindness.

Think of it as a zombie apocalypse dream, where a huge wave is hard to escape.

Dream about eating a locust

Eating a locust in your dream could represent that you're secretly keeping money from others. However, this money could be from ill-gotten gains.

You may also find this interesting:  Money Dream Meaning: Nicest Dream You'll Ever Have!

Dream about a locust bit you

A dream about locust biting you means someone wants to steal your ideas or work. Therefore, be careful of people pretending to be close to you because someone has hidden agenda.

If you dream about catching locusts with your hands means that you're trying to stop particular destruction. Perhaps you are trying to fight climate change, but doing so won't be easy.

When you dream of a giant locust plague, it means that there's a group of people or organizations that will work hard to gain something. These people could be protestors who work primarily for their good. Their actions make a significant impact on everyone.

If you dream of killing or terminating the locust plague, it means that you want to stop an argument. You want to live a peaceful life with no worries about something.

Dream about traveling swarm of locust

Dreaming of a traveling swarm of locusts moving from one place to another symbolizes transformation or change. You're having a hard time making decisions.

Moreover, it could represent job seekers who wish to work at different places for their gain or needs.

If you see black locust in your dreams, it represents psychological stress. Therefore, you feel less motivated and easily discouraged by other people.

To dream of red locusts, it means that you're wasting your time on a person who's not worth your time and effort. This person can replace and leave for other people.

For example, if you have a boyfriend and you have a minor argument, he can replace you right away with another girl.

Green locust in your dream represents devastation that might worry you because you may lose your job or other means of livelihood.

When you dream about a dead locust, it represents bad luck. You want to achieve something briefly for the sake of success.

However, quick success can lead to failures and stress, which can affect your health too.

Dreaming of locust beans means that you're not satisfied with specific situations. You need the help of spiritual guidance to help you move forward.