Owl Spirit Animal: The Symbol Of The Wise - Spiritual-Galaxy.com
Skip to content

There is one spirit animal that is special to you and which you keep throughout your lifetime. Various events can alter our lives. Spirit animals will assist us in dealing with ourselves, as well as others. Everything we do in life—or how we use our time and talents—will determine which animal will come forward to aid us.

Owls are nocturnal predatory birds that symbolize evil, death, and disease. A hoot from an owl is still considered bad luck in some cultures. However, as a spirit animal, owls symbolize wisdom and insight from the gods.

Owls are also used in ceremonies to dispel illusions and to guide people towards discovering new knowledge. For example, you may call the owl spirit to get further wisdom, who would then take you into undiscovered territory.

You are fascinated when life presents you with mysteries. When you learn to appreciate life's wonders and miracles, you start to enjoy the hidden gems of life.

The owl spirit animal tells us to delve deep within and be truthful to our own goals and sensations. The turning of an owl's eyes and the capacity to see in the dark teaches us the light and the trick.

You have ways of discovering it, of avoiding it, and of being true to yourself. In other words, when our inner vision is clear, we become able to detect deceit in the external environment.

You can also be more vigilant, quiet, majesty, and reckoned with the owl spirit animal. Try to move slowly and sit on a large branch of the tree, look around, and you will be amazed to see what is going on around you and how much you can accomplish.

Similar to Wolf Spirit Animal, The owl spirit animal advises you to place your loved ones above everything else, above all else. For example, you may have a short time with your children. Therefore you must take all possible measures to safeguard them at any cost.

You will also get the gift of hope with the owl spirit animal. Where others can feel lost in the darkness, the owl spirit will guide them to see the light.

And after all, what else is a lightworker supposed to accomplish while on Earth? Your calling is to shed light on people, to guide them on their spiritual path. 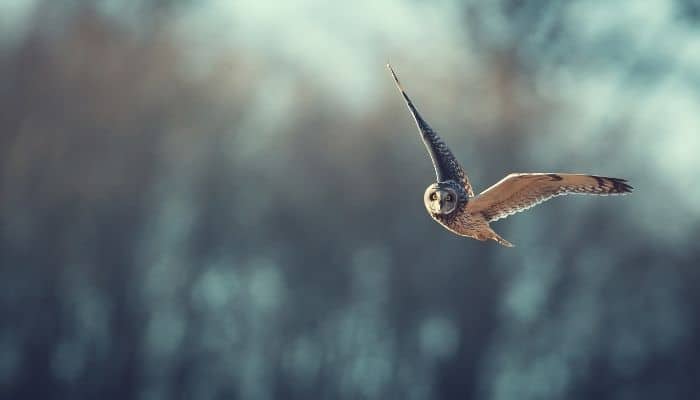 Chinese Symbolism
Similar to Squirrel Spirit Animal, The owl is a strong emblem in Chinese philosophy, representing a protective, intelligent, and intuitive spirit. An excellent omen of good luck and greater riches is given by this yang expanding energy; also, it bends any bad energy from the house.

According to feng shui, the symbol of the owl may enhance your understanding and intuitive insights. However, too much of it may overwhelm you if put in a place where you are seeking to relax, such as meditation or yoga. Increasing mental activity, like an office or workspace, is ideal.

You can put an owl emblem in areas where children play to make them feel secure and well-being. Children often spend time in locations near doors or windows to repel negative energy, such as evil.

Owls are excellent at taking in unwanted energy from your house. It can make them fantastic friends to have if you live in a space where many people pass through or make a lot of noise.

In Celtic mythology, owls were strong protectors of truth and honor and knew the route to the underworld. Therefore, even if we are misleading ourselves, the owl has no tolerance for dishonesty.

The goddess of fertility linked the Celtic owl in ancient times. The owl can see in the dark and function as a messenger from man to god is being admired.

The views of Celtics are in contrast to what American natives consider owls and their importance. Owls are guardians of respect, honor, and glory, according to Celtic mythology. In addition, they believe an owl is a fighter because of her incredible expertise.

Celtics believed that owls knew the routes to several realms that many do not know because of this expertise. No one will suffer any disappointment since the owls are devoted to truth and splendor.

In Native American mythology, owls are well known as protectors of sacred information. Even now, in many ancient societies, owls are believed to be priestesses and magicians in disguise. In addition, owls, a sign of knowledge, dignity, and protection, are considered sacred to the Greek goddess Athena.

An old superstition that an owl was soaring over the battlefield indicates a guaranteed win for the side it favors. Athena is shown with an owl perched on her shoulder. Uttering the solutions to life's many questions and bestowing upon her the ability to view all things as they are. An owl was also seen in all three ancient cultures as a symbol of the underworld and a protector of the fallen.

Owls are adept at seeing in the dark, making them great animal totem for quests involving night activity. In addition, owls use their powerful sense of sight to expose illusions and falsehoods.

When situations are unclear, summon the owl, which you can trust to provide you with discernment and stability. The owl's clarity of vision and mysterious natural wisdom will allow you to see farther even when the pathway appears to be hazy.

An owl is a death emblem. Owls' hooting is a sign of bad luck. Its image has been associated with superstitious tales warning children to remain indoors at night or not weep too much, since owls fond of taking children away if they weep.

Several tribes believe that when owls make sounds, it is a warning of when someone has violated a tribal taboo. The owls are messengers from beyond the dead. In Mexico's Aztec and Mayan traditions, owls acted as mediators and companions to the gods of death.

The owl is a bird of the night and considered unclean by Jews and is not acceptable for food consumption. However, there are many owls found in Israel and mentioned in the Bible many times.

Owls are creatures that often go to deserted places such as ruined cities. They are symbolic of desolation, ruin, suffering, and loneliness, according to the Bible.

The owl in Palestine is often found in trees and shrubs. However, the owl is also present in abandoned structures, ancient buildings. The name of this bird in Arabic means “the mother of ruins.”

When the prophet Isaiah described the city of Edom's downfall, he said that the owls living there are an omen of the nation's fate. So, the Edomites ceased to exist as a country in their own right.

To see an owl spirit animal in a dream signifies a growth of your awareness or some other kind of mystical powers. The owl spirit knows what you are up to in the deepest corners of your mind and could provide you clarity into your feelings.

Attending to the owl spirit might help you develop self-awareness. Also, it may be able to assist you in exposing mysteries, like death and life.

Seeing an owl hanging in a dream represents wisdom and awareness. Owls have a 360-degree range of view, which means they can see whatever is around them. The owl spirit in a dream means you need to be more aware of your surroundings.

Dreaming of an owl attacking and assaulting you suggests a certain someone near you who is angry or jealous. Someone will betray you and will ruin your life forever.

Expect some romantic dates to arrive if you dreamt of a white owl. The most precious moment of your life is the encounter you have been wanting; the person who will “rock your world” is ready and eager to meet you. Awwww!!!!! It also signifies going on a date or receiving a promotion at work.

An owl being murdered in your dream symbolizes that you must prepare yourself for real-life dangers. It might also suggest that you need to be aware of your professional and personal health, family, job, and social relationships.

Call your Spirit Animal when:

Let the owl lead you on your spiritual journey and a shamanic adventure. Connect to your inner knowledge and intuition and trust your instinct.

Read more about this article on Tiger Spirit Animal.