In the animal kingdom, snakes are one of the most feared creations because of their ability to kill animals and humans due to their venomous bites. They are not popular among people because of their character and behavior, but we can't deny that snakes, particularly cobra, hold an important symbolism.

The cobra is a powerful spirit animal and is commonly used to symbolize transformation, wisdom, sexual energy, danger, and death. They also signify speed, courage, and determination. In other cultures, cobra is considered the protector of the Pharaoh.

The symbolism for this animal was created many years ago, and even today, people are fascinated by its power. Something mystical about these creatures is deeply etched in our minds by culture and religion.

Cobras belong to the snake family and are considered one of the most dangerous species in the world.

Spiritual meaning of cobra in dream

Have you seen a cobra in your dreams? Did it wake you up and feel anxious to understand its meaning?

Seeing a snake in real life can send a chill down to your spine, especially the venomous types like a cobra. Though it's frightening to dream of a cobra, it doesn't always mean bad or something untoward.

Instead, a dream about cobra can be both favorable and unfavorable. It could indicate a new beginning, a change or transformation, which signifies good luck.

According to different folklores, cobra represents freedom because it's tough to tame a snake in reality. If you see cobra in your dream, it symbolizes you're in dire need of freedom.

It's like something has zipped you down, impeding your movement and your ability to do anything. It could be that something suppressing you is hidden inside your inner feeling.

You are locked in a circle of your thoughts, mainly negative.

Meanwhile, it could mean that someone dominant over you controls you, even your life decision. They made you believe that you couldn't handle your life well, so you need their guidance and support.

Hence, it's necessary to break these handcuffs that are tying you to grow and develop positively and healthily.

A dream about cobra denotes determination and strength. If you see the cobra in your dream and it's not harming you, it means that you have these qualities.

This dream also highlights that you're on the right path.

Meanwhile, if you see this unfavorable, you need to have these qualities. It signifies that you don't have the willpower required to achieve these goals with obstacles on your way.

Whenever you face challenges, your self-confidence falls apart, and you end up giving up.

If you plan to reach your goals, then it's necessary to have that strong determination whatever you do. Physical strength is also an essential quality required to achieve your life-long goals.

Each of us has an innate power, but we just don't realize it. This dream denotes that your subconscious encourages you to awaken your inner strength.

As mentioned a while ago, cobras are like the king of snakes in dreams. They symbolize good news or could signify success in a career, love life, and business.

A dream about cobra indicates that it's time for you to begin something new. For example, you are starting a new project or business.

This dream tells you that it's now the right time to plant the seeds and reap the fruit of your hard work.

It suggests a positive change and transformation in your life. For example, you want to take on a new hobby or discover your passion.

However, it does not mean to take grand steps; sometimes, it's better to start with the little things. The more you embrace change, the more you'll accept the things coming to your life.

It will expose you to new experiences, and some opportunities may open up for you too.

Seeing a cobra in your dream denotes that you need to be cautious of your surroundings. There's a possible threat around, waiting for the right time to hit you.

You can prevent it by being cautious of the people around you. This dream also means that you have to make decisions in your life quickly because you cannot spend all your time analyzing the pros and cons of the issue.

To avoid ending up with wrong decisions, you may set a deadline when making a decision. Also, get rid of all the possible bad options so that you can choose easily.

However, it would be best if you were prepared for the possibility of failure.

This dream could also represent a warning sign. It suggests that someone around you acts like a snake, so you need to maintain your distance from this person.

It could be your friend, relative, coworker, or anyone close to you. Your intuition or your inner psyche can help you identify this person.

There are other dreams related to cobras that you should also note. For instance, seeing a cobra bite you in a dream means that someone close to you will disappoint you, like gossiping about you.

You may also find this interesting:  Snake Bite Dream Meaning & Interpretation: Who Wants To Hurt You?

This person spread nasty rumors about you, making you feel unhappy and embarrassed. Do not fret because you're a strong person and can handle the situation well.

Meanwhile, seeing someone being bitten by a cobra suggest that you will hurt or offend someone. So be careful with your words and actions, as they can hurt your relationship with this person.

Killing a cobra in a dream signifies that you will go the extra mile to reach your desired destination while maintaining your reputation. It also suggests that you can quickly get rid of your enemies and teach this person a good lesson.

Moreover, a dream like this denotes solving your internal conflicts.

On a negative note, killing a cobra in your dream suggests that you're crushing your creativity. You think your ideas are not good enough, but that doesn't necessarily mean true.

You may also find this interesting:  Dead Snake Dream Meaning & Interpretation: What To Overcome?

Give yourself a chance to show your creativity.

Playing with a cobra in your dream means that you will find your way out of the most challenging situations. As long as you remain calm and use your wise reasoning, you can think of a solution.

Whatever your problems are, try to analyze and explore all the possible solutions to your problems. Keep calm and clear your mind when making a decision so that you can make the correct answer to your questions.

Seeing several cobras in your dream might seem terrifying and creepy. However, it does not denote negative meaning.

Many cobras in dreams symbolize promotion at work or becoming a leader. You'll feel happy because you can have the chance to showcase your experience and skill.

For example, your boss will give you a major project, where you have the opportunity to show your skills and abilities to manage people.

What does the cobra symbolize in Egypt?

The cobra holds a significant symbol in ancient Egypt. A rearing cobra with hood-flared ready to strike was sculpted as an image called a Uraeus that signifies protection.

One myth believes that the sacred eye of God's creator had been devoured by the sun and turned itself into a deadly cobra. And to soothe the eyes, God placed it on his, transforming the striking cobra into a sign of protection.

Another significance of the cobra in Egypt is the Egyptian Banded Cobra. It can reach 8 feet long and raise its head and flared hood 2 feet in the air. The hood can spread 5 inches across. 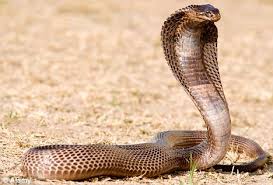 This snake has a potent neurotoxin that can cause respiratory failure within 10 minutes if left untreated.

The Smithsonian National Zoo theorized that Cleopatra's asp was a cobra, a valuable weapon for a quick attack. The snake's symbol, or the Uraeus, represented a formidable goddess who guided both worlds – life and death.

Because of the snake's symbolic significance in Egypt, they mummified cobras and put them in Egyptian tombs.

In arts, the cobra with a raised head is found everywhere in Egyptian tombs. You can see it on carved furniture, sometimes forming legs, arms, and backs of chairs.

Glasses or vessels used by royalty and upper-class people are shaped like cobras. It is also used as armbands or as an ornament on the circlet or crown of the reigning Pharaoh.

They may also be used as a substitute for Hathor or Sekhmet, known as the messengers and avengers of the Sun god Ra. Ancient Egyptians believed that Ra gave Uraeus (symbol of might and protection) to his descendants, who would become the successive Pharaohs.

Moreover, cobra is considered to be the expression of the Goddess Wadjet. Wadjet illustrates the Lower Egypt that wears a red crown. She is responsible for the protection of the King or Pharaoh.

Although real Egypyptians cobras do not spit venom, Wadjet spits venom at anyone threatening the Pharaoh or royal tomb.

Wadjet is like a mother figure to kings; their royal status was a direct gift from her. Meanwhile, Nekhbet is a vulture goddess that wears a white crown and represents Upper Egypt.