Mars-Neptune Aspects in Synastry Chart: Do your opposite traits stand a chance for a romantic union? - Spiritual-Galaxy.com
Skip to content

Mars in Conjunction with Neptune in Synastry Chart

The meeting of the Mars and Neptune person is like the perfect description of opposite poles attract. Their differences are the vital force that maintains the balance in their relationship. They complement each other and their energies are smoothly blended.

Mars’s person is undaunted and straightforward with a dynamic personality. On the other hand, Neptune’s person is more subtle and is spiritually inclined.

Neptune’s person is attracted to ardent passion in reaching its goals. Neptune loves the way Mars person presents itself to other people by its dominating nature. Neptune desire to soften the hard edges of the Mars person.

On the other hand, the Mars person adores the practical and spiritual mindset of the Neptune person.

The strong character of Mars person when partnered with Neptune’s laidback personality creates a balance between the two of them. However, Mars person must also know when to step back and let the reigns be controlled by the Neptune person. Because of the strong personality of Mars person, he/she has the tendency to become and stubborn and close-minded. If this continues, this could precipitate major problems in their relationship.

Despite the strong attraction both Mars and Neptune feel in each other, there would still be negative feelings that may resurface in this aspect. Mars person might get annoyed with the laid-back and carefree nature of the Neptune person. On the other hand, Neptune’s person might resent the Mars person for not giving him/her room enough to fly and be himself.

Because a Mars person wants to control and order, he/she may get upset with Neptune’s mellow personality. As for the Neptune person, they work at a calm and relaxed pace making sure that their work is of good quality. Mars person on the other hand wants to get things done quickly and right away.

Despite these negative vibrations that threaten the harmony in the relationship between Mars and Neptune, if both planets learn to accept and love their differences, they will both beautifully grow within the relationship. Even when these two planets come together not as romantic partners, they still have good chemistry that allows them to be successful with the help of one another.

Together as co-workers or business partners, they can succeed in all their projects and expand on their business. 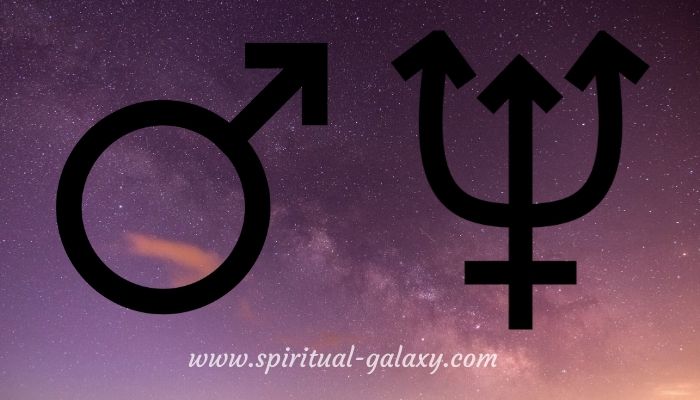 You may also find this interesting:  Mars-Ascendant Aspects in Synastry Chart: Do your personalities are compatible with each other?

Neptune person, on the other hand, takes the role of the submissive. Neptune is the supporting and nurturing force of the Mars person. It helps Mars become more confident in expressing itself to others.

The qualities each planet possesses highlight the exceptional traits each planet has. Your energies complement each other and form a harmonious whole.

You understand each other on a more profound level. This allows you to sense the feelings and emotions of your partner. Both partners are honest and open with each other. Because of this it creates a healthy balance between the Mars and the Neptune person. There is a deep karmic connection between the Mars and Neptune which allows them to perceive each others needs and wants.

There is a shared responsibility in the relationship between Mars and Neptune in a soft aspect. Both planets crave to reach out and help those in need. Their humanitarian nature will direct them to a career that allows them to touch other people’s lives.

The potent energies that both Mars and Neptune possess are what makes their intimate moment so passionate. Both planets are burning with a fiery, sensual attraction to each other. Their coupling is karmic. They are more inclined to try ethereal forms of sexuality.

The Mars person’s strong character will undoubtedly come after Neptune person to discuss the problem. Neptune, on the other hand, would further distance itself from the Mars person avoiding any confrontation.

Neptune person may resort to lying to avoid aggravating the Mars person. This could precipitate bigger problems in their relationship. Deception and cheating could be the issue in the relationship between Neptune and Mars in the hard aspect.

When two people in a relationship work together and be kind to one another, there is a high chance that their relationship will succeed. But when negative energies surround between you and your partner, there is the possibility that two of you will fall apart.