How to get my Aquarius man back after a breakup?: In Only 6 Ways! - Spiritual-Galaxy.com
Skip to content

Most of us do not have an idea of how exactly to handle a problem with a relationship, particularly with a relationship that is starting to fall apart. Rather than getting a step back and thinking what the best solution might be, we jump in, head first. We are being taken control of our emotions. You need to pause, think, and take action if you want your guy back. You’ll be thankful you did.

Going through a breakup with an Aquarius man can be hard. An Aquarius man tends to have a tender heart, and it can break quickly, which makes it hard to win him back. But this does not necessarily mean that it has to be the end of your relationship.

An Aquarius man is very sensitive despite being unexpressive with his emotions. An Aquarius man has some traits that add to his slightly unforgiving nature. But, his heart can be won back if he sees you making an effort to win him back. An Aquarius man can understand other people’s points of view. 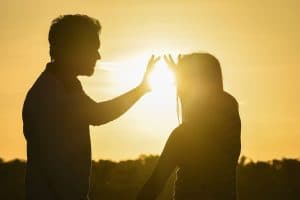 Make an apology and figure out the right strategy to do it. Through this, you will be able to let your Aquarius man forgive you and stop ignoring you.

To win back your Aquarius man’s heart, the strategy will depend on the circumstances and how gravely your mistake and hurt his feelings that caused you two to breakup. If you want to rekindle your relationship with your Aquarius ex, you need to understand that you have a long way to go.

Here are some tips to win back your Aquarius man’s heart:

Be Sincere. An Aquarius man is real, and he wants his girlfriend to be the same. Saying “sorry” is not enough if you are trying to win back an Aquarius man. Apologizing for something does not cut your every mistake.

An Aquarius man understands that it was an error on your side and would not change his mind, not unless if you admit or accept that it was your mistake. For an Aquarius man, it is crucial for you to fully realize and understand that what you did was wrong because he is very sensitive. A minor sorry does not mean anything for him; it will only be considered as an empty apology. You have to prove to an Aquarius man that you are genuine and sincere with your apology.

Along with your effort to correct your mistakes should be a heartfelt acceptance and an apology for what you did wrong. What an Aquarius man aspires is to view a kinder world and correct what is wrong with it. He will only accept your apology when he sees that you are trying to improve yourself and that you are trying to make things right.

You may also find this interesting:  Aquarius Compatibility in Love, Sex & Relationship

To get him back, you have to be willing to let him go. If you force or try to make an Aquarius man come back with you, it will end up in failure. Just be cool about the breakup because this relaxes him. He will distance himself more if you keep on trying to hold onto him.

Do not ever create a drama or even argue with an Aquarius man because it is absolutely the worst idea. By doing this, it will only make him feel that you are pressuring him, which he hates by the way. Busy yourself, get your mind off of him, and do what you can. Through this, you are sending an unequivocal message that you respect his needs.

Do this if you want to move forward to a romantic place again. So, you have to let go to give him space, and through your actions, show him that you should be together again.

Play hard to get. It all depends on the sensitivity of the situation and the reason why you broke-up. Playing hard to get might work to win back an Aquarius man. Ignore him, just like you did to attract him at the start of your involvement. Ignore him just sufficient enough to make him do the first move, not to the point where he assumes you have lost all interest and want to move on.

Leave an Aquarius man to wanting more. Let him come to you, whether it is a date or a conversation on the phone. You should always have an excuse whenever you are interacting with an Aquarius man to leave him craving for more. Drive him with desire. These tactics have proven to have worked well on an Aquarius and Scorpio man. He will initiate the conversation when he sees that despite him being mad at you, you are not coming forth.

An Aquarius man is fiercely loyal, and he values the connections he makes. It will push an Aquarius man to seek your attention when he thought of losing a friend in you he cares about. This will likely improve the chance that he will take your apology right away because this will help push aside some of the hatred and rage that he might have with you.

Be mature about it. When you are trying to win back an Aquarius man, excessive crying, silly or childish apologies, nagging, and tantrums do not work for them. When you are learning how to get an Aquarius man back after a breakup, your maturity and control about the situation will be necessary. An Aquarius man despises compulsive people and people who do not have the power to control their emotions.

Your chances of reconciliation will lower if he sees either of these behaviors in you. If you cry easily or if you are a very emotional person, then do it privately. Take time to assess your own emotions while you give an Aquarius man the space to breathe. Consider how you will go about justifying yourself and cry out all the tears out.

Be prepared to choose your words and make sure you have an argument and proof to back you up.

Apologize by conveying with sincerity your regret, and explain that you will try to improve your behavior. Through this, you can be mature enough during your discussion, and don’t forget to make a sincere apology. When an Aquarius man knows you have thought about it and genuinely want to reconcile, your chances of winning him will be much better.

You may also find this interesting:  My Aquarius Man Is Ignoring Me, What Do I do?

Reassure him even if you have broken up. Chances are when you are trying to win back an Aquarius man; you do not want to move on or breakup. An Aquarius man though unemotional on the outside can be the jealous type, and they are very sensitive.

Aquarians still feel threatened by others, and they feel insecure, they might burst out with raging jealousy. You should not openly flirt with someone or go out on dates because even though you have broken up, an Aquarius man is very envious. Reassure him that you only seek reconciliation with him. Through your effort, it will let him know that you genuinely care for him, and you want to improve your relationship.

In addition to your proclamations of love and apology, back him up with your actions. This is important in making an Aquarius man to get back to you and to consider your reconciliation.

Be a friend to him. If your connection with your Aquarius man has died out, being friends with him might sound odd, but it might work. Although romantic feelings for your Aquarius man is not that easy to throw away, he will think that the connection you have shared has now subsided and changed. You might have a chance of reinvigorating romance by being just his friend. Your lucky because an Aquarius man values friendships more than romantic relationships.

An Aquarius man is very loyal to their friends, just like the Virgo man; being his friend can be an effective way to get back to him. To pursue a platonic relationship or to win back an Aquarius man. You will need to compartmentalize your romantic afflictions and sufferings.

Revisit the possibility of making things more romantic once you have nurtured the relationship back to the point where he can trust you and be comfortable with you again. An Aquarius man’s feelings of lust and love for you will rush back if he sees that you support him in all of his endeavors, care for him, and genuinely love him.

Don’t bring up commitment if you are starting to talk to your Aquarian guy again. Be enjoyable; just focus on making your conversation light. Just be in the moment and have some fun.

Being positive and confident at the moment makes you come across as optimistic about your future, which will make him want to be a part of it again, eventually.

Breaking up with the man you truly love is genuinely devastating, especially with an Aquarius man who holds a special place in your heart.

Indeed an Aquarius man does a hard time to commit, but once he does, he’s all in.  Understand that if you broke his trust, it would be too hard to gain back his trust again. If you know you are at fault, be the first one to approach him and apologize sincerely. Give him the space he needs and be mature in handling the problems in your relationship.

If he comes back, then surely, you’ll have a more fulfilling and loving relationship. But if he doesn’t, understand that there may be someone much better out there who is a perfect match for you. The good news, though, is that you can still be friends with an Aquarius man even after you broke up.

Try to build a loving relationship with yourself first. Aspire to become a better and stronger version of yourself to attract a man who is better for you.